1. Scott's tests are not over yet
​
Retired NASA Astronaut Scott Kelly may have completed his One-Year Mission aboard the International Space Station when he returned to Earth this past March, but he will continue to participate in the ongoing human research investigations that began long before his departure in March of 2015.

​“The mission will continue even after Scott returns,” said John Charles, chief scientist of the NASA Human Research Program. “For the one-year mission research, we will be collecting post-flight medical data three-months and six-months after he is back on Earth."  Scott will still be giving samples up to a year after his return even though this record-breaking astronaut retired in April 2016.
2. He's not in this alone

Scott's return reunited him with his identical twin brother, Retired NASA Astronaut Mark Kelly.  The same critical data that was collected from Scott during the One-Year Mission was also gathered from Mark on the ground as part of an integrated Twins Study involving 12 universities, NASA biomedical laboratories and the National Space Biomedical Research Institute.

​“We realized this is a unique opportunity to perform a class of novel studies because we had one twin flying aboard the International Space Station and one twin on the ground,” says Craig Kundrot, Ph.D. and deputy chief scientist of NASA’s Human Research Program. “We can study two individuals who have the same genetics, but are in different environments for one year." NASA’s Human Research Program will share the results from this unprecedented Twins Study approximately one year after Scott's return to Earth. 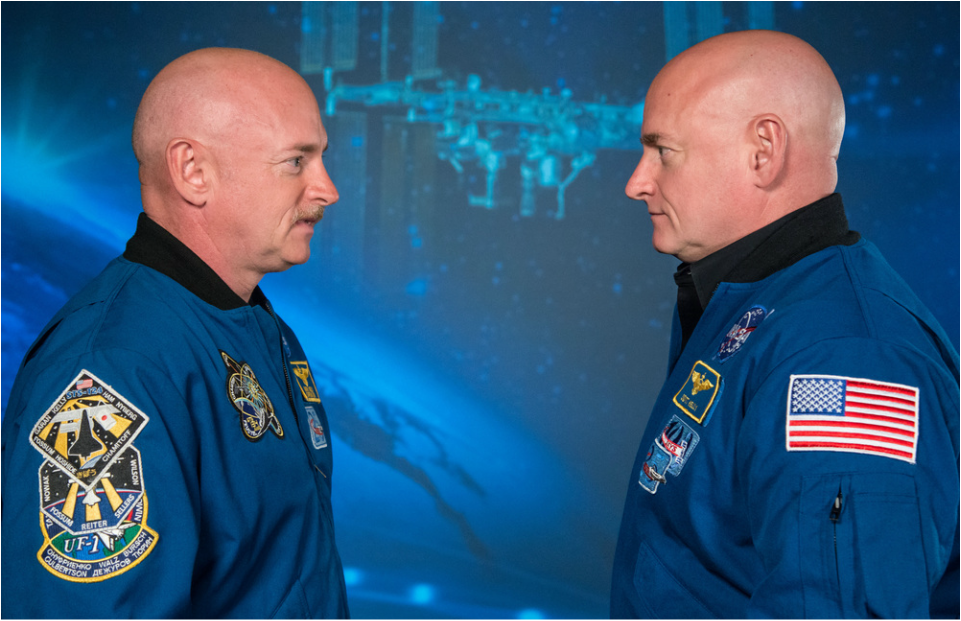 Identical twin astronauts Mark and Scott Kelly
​Credits: NASA
​
3. It all points to the Red Planet!

The One-Year Mission has been called a stepping stone for future missions to Mars and beyond.  NASA's Journey to Mars is an approximately 30-month mission that will push the limits of humans in space.  It is therefore important to understand how factors such as weightlessness, isolation, radiation and stress of long-duration spaceflight truly effect the human body so that countermeasures can be created.  "We're going to need to understand this really well before we decide to send people to Mars on an extended mission," Mark Kelly told NPR's Renee Montagne on Morning Edition.